The director of Collegium Geomanticum, John Michael Greer, also casts and interprets geomantic charts for clients. The cost for a geomantic reading and interpretation is US$25.00. If you are interested in having a chart cast and interpreted for a question of your choice, please contact the director personally at jmg@collegeofgeomancy.com or by mail at PO Box 387, Ashland OR 97520, USA. Be sure to include the question you would like your reading to answer with your request. You can also order a reading directly via PayPal with the button below.

(If your browser is set to prohibit loading of third-party images, you won’t see a button; in that case click here to go directly to PayPal. Your payment should be made to jmg@collegeofgeomancy.com; be sure to include your question on the comment line.)

If you’re unfamiliar with geomancy, the following sample reading shows a little of what geomancy is and what it can do.

Every geomantic reading starts with a question. This can be very specific or very general, depending on circumstances, but the question provides the framework from which each part of the geomantic chart takes its meaning. In this reading, the client has always wanted to take a trip to China, and wanted to know if she would be able to go the following spring. Discussing the reading in advance with the geomancer, she explained that she had never been overseas before, and was worried about how well she would cope with an unfamiliar culture and language. She was also worried about the cost.

Like most systems of divination, geomancy uses seemingly random events to measure the subtle patterns that shape human affairs. The geomancer uses one of several traditional random methods to cast four geomantic figures – patterns of four rows of single and double dots – and from those, the Four Mothers, eleven more figures are created. Each figure and position in the chart has a special meaning. The first twelve figures go into the twelve houses of the geomantic chart, and refer to specific factors at work in the life of the querent (the person for whom the chart is cast). The houses of the geomantic chart are shown below: 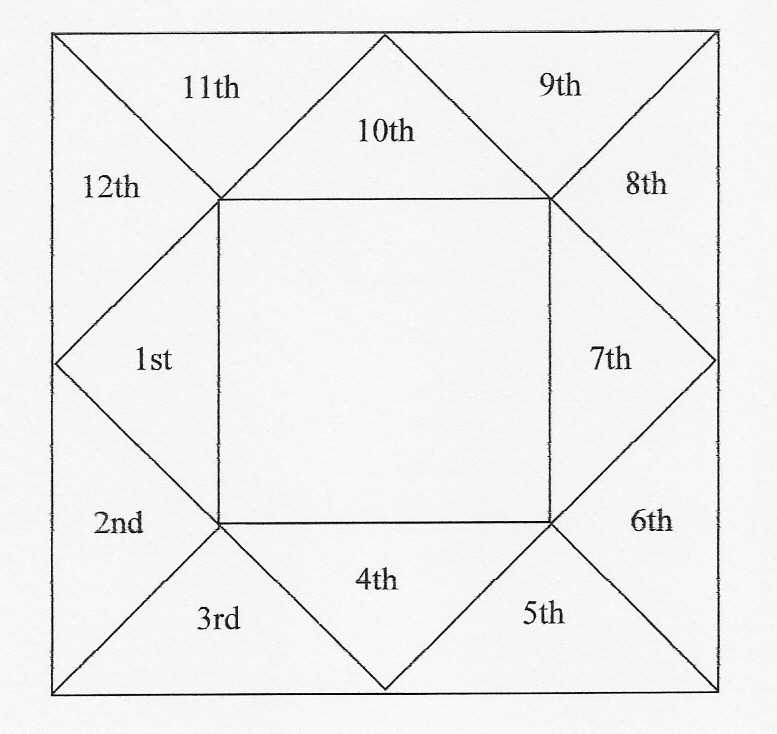 The remaining three figures are called the Right Witness, the Left Witness, and the Judge, and provide an overview of the entire situation.

The chart cast for this reading is shown below: 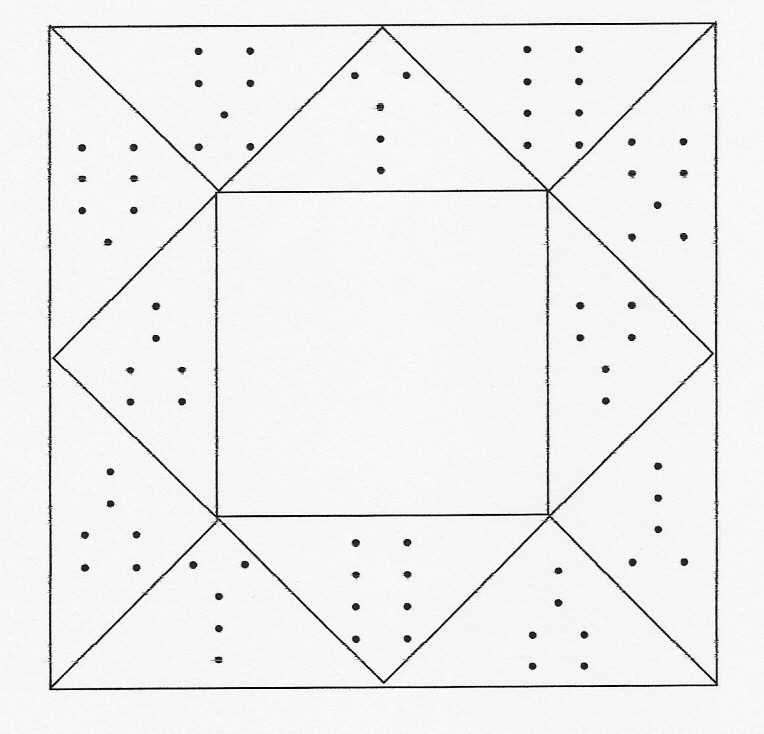 Two of the twelve houses carry most of the meaning in this reading. The first house, on the middle of the left side, represents the querent herself. The ninth house, on the right of the top side, corresponds to long journeys and adventures (among many other things), and so it represents the trip the querent wants to take. The geomantic figure in the first house is called Fortuna Minor (“Lesser Fortune”); despite the name, it’s a favorable figure, and more specifically it represents success by way of quick movement and help from others. The figure in the ninth house is Populus (“Crowd”), a neutral and receptive figure that responds to whatever other influences in the chart affect it.

In a question of this sort, involving the possibility or impossibility of the quesited (the thing the querent wants to know about), a critical factor in the chart is whether or not the two important houses connect with each other by a mode of perfection. There are six modes of perfection in geomancy, and one of them, called mutation, appears in this chart. Fortuna Minor, the figure in the first house, also appears in the fifth house, on the right of the bottom side; Populus, the figure in the ninth, also appears in the fourth house, in the middle of the bottom, right next to Fortuna Minor in the fifth. Since the two figures come into contact in this way, the chart predicts that the querent will be able to make her trip to China. A chart that perfects by mutation suggests, though, that the querent will find it easiest or best to achieve her goals by unexpected or roundabout ways.

Money is also an issue in this question, so another house has to be taken into account – the second house, which represents the querent’s money and possessions. Fortuna Minor also appears in this house, making another mode of perfection with the first house, the mode called occupation. This is the most positive mode of perfection and means the querent should have no trouble whatever affording the trip.

Meanings of the Figures

The figures themselves have a specific message to offer. Fortuna Minor, as mentioned above, means success through quick movement and assistance from others, and Populus means a crowd or group of people. Combined with the mutation between the two figures, this suggests that the querent should take a second look at her travel plans, check out all the alternatives, and consider going with a tour group rather than taking the trip all by herself, as a response to her concerns about dealing with a foreign language and culture. Whatever she chooses to do, the reading advises, she should make her travel arrangements promptly; this will help keep costs down (the occupation with the second house) and make sure she can get the trip she wants (the mutation with the ninth).

Another traditional rule of geomantic interpretation, the company of houses, expands on this. Under certain circumstances the figures in odd- and even-numbered houses trade places, with the figures in the odd houses representing the past, and those in the even houses representing the future. Both the first and the ninth houses qualify for company of houses, and trade figures with the figures in the second and tenth. In the case of the first, this doesn’t make any difference, since the first and second houses share the same figure, Fortuna Minor. The ninth and tenth have more to offer, though. The figure in the tenth house is called Caput Draconis (“Head of the Dragon”) and represents beginnings. This suggests that traveling to China might be the first of several trips, or in some other way set new patterns in motion in the querent’s life.

The Witnesses and Judge (not shown in the diagram above) sum up the overall patterns at work in the question. The Right Witness is Caput Draconis again, the Left Witness is a figure called Fortuna Major (“Greater Fortune”), and the Judge is the figure Rubeus (“Red”). The Right Witness represents the querent, the Left Witness the quesited, and the Judge – which is formed by combining the two Witnesses according to traditional rules – is their interaction and its outcome. The Right Witness, Caput Draconis, suggests that the querent is ready for something new and different in her life. The Left Witness, Fortuna Major – the most positive of the geomantic figures – suggests that the trip to China is likely to be a wonderful experience. The Judge, Rubeus, is often a difficult figure, but in the company of two positive figures it becomes much less challenging. Its core meaning is transformation, and it suggests that the trip the querent is planning may bring unexpected changes into her life.

Summary of the Reading

Question: Will the querent be able to travel to China as she hopes?

The reading is strongly favorable for this, and also suggests that she will have no trouble finding the money to pay for the trip. She should consider all the alternatives, including the possibility of going with a tour group, and should make arrangements soon in order to save money and avoid problems getting what she wants. This is a good time in the querent’s life for new experiences and new opportunities, and this trip promises to bring plenty of both.